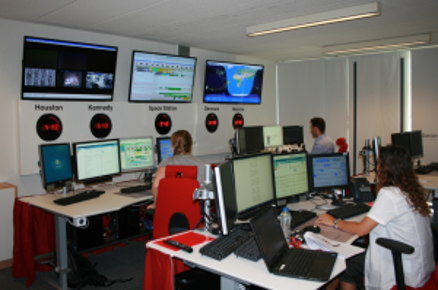 Danish Aerospace Company (DAC) is ready to support Danish ESA-astronaut Andreas Mogensen’s activites on the International Space Station (ISS) from their control room in Odense during his 10 days stay from September 2nd to 12th, 2015. We wish him best of luck on his historic journey.

DAC has one of ESA’s seven control centers to support ESA-experiments on the ISS. The company has live video, data and sound from ISS during the various experiment activities.

Danish Aerospace Company established in 1993 an operational User Support and Operations Centre (USOC) during the involvement in the Space Shuttle D2-Spacelab mission and the ESA-mission Euromir-95 to the now retired Russian Space Station Mir. DAC was since selected by ESA as a payload and experiment support centre for support to payload operations for ESA’s Pulmonary Function System (PFS) and Portable PFS for the ISS.

Danish Aerospace Company established in 1993 an operational User Support and Operations Centre (USOC) during the involvement in the Space Shuttle D2-Spacelab mission and the ESA-mission Euromir-95 to the now retired Russian Space Station Mir. DAC was since selected by ESA as a payload and experiment support centre for support to payload operations for ESA’s Pulmonary Function System (PFS) and Portable PFS for the ISS.

“We are ready to support Andreas Mogensen from launch to landing. We wish him all the best of luck in the world on his historic and exciting journey. He has worked hard to get to this point, and we hope he will enjoy the fantastic experience. Our team will be following him closely from ground in Odense and we will be supporting him in many of the experiments.“ - says Thomas A. E. Andersen, CEO of Danish Aerospace.

This is a Danish experiment prepared by DAC where Andreas Mogensen will be testing a new heart rate monitor and force measuring pedals on the DAC stationary bicycle (CEVIS). The systems will utilize a digital transmission scheme that can compensate for signal reflections and emissions from other sources.

AquaMembrane
Aquaporin Space Alliance ApS, a joint venture between Aquaporin A/S and DAC, will test the Aquaporin Inside™ technology in space for the first time. The test of the new Biomimetic water filtration membranes will use wastewater from the ISS’ water recycling system. The waste water will be filtered through three Aquaporin Inside™ membrane assemblies and samples will be brought back to Earth for analysis.

Space Headaches
This is a Dutch experiment where Andreas Mogensen will be one of many subjects screened for headaches symptoms and their etc. in order to understand better the reasons for developing headache in space, a frequent occurrence among astronauts.

Interact
This is a Dutch/German experiment proposed by Dr. André Schiele from the ESA D/TEC Telerobotics & Haptics Laboratory. Interact is a high-tech technology demonstration experiment that is aimed at demonstrating the feasibility of intuitive robotic remote control over heavily delayed and variable delayed communication channels.

In preparation of the Andreas Mogensens mission and other related activities on ISS, DAC among others has developed procedures, experiment software and pre- and post flight Baseline Data Collection-sessions on the astronauts, and has supported training session at ESA’s astronaut center in Cologne. During the missions, DAC provides operational support, re-planning, trouble shooting, and quick-lock analysis of data and repair procedures if required.

During the past year on ISS DAC has supported more than 41 large and 123 smaller test sessions at the space station, of varying length between 5 minutes to 4 hours. This support was both for DAC’s own equipment and ESA’s equipment. In total DAC supported 125 hours’ scientific activities carried out by the astronauts at the ISS in 2014.

“Ongoing experiments on the ISS requires a lot of preparations. First the experiment has to be accepted by ESA, and then the hardware to support the experiment must be designed and built. The next steps are to develop test procedures, training material, train crew and perform ground tests. Usually several years passes by between experiment selection and experiment execution on ISS. DAC has been involved in the preparation of the mission of Andreas Mogensen for several years and will support Andreas every day from 8 – 22 from DAC’s control center in Odense.” – says Poul Knudsen, DAC’s USOC manager

In addition, DAC currently operates two lung-physiology medical equipments on ISS for ESA: Pulmonary Functional System (PFS) and Portable Pulmonary Functional System (PPFS). The equipment is used both for basic respiratory and cardiovascular scientific research on astronauts as well as for monitoring the fitness of the astronauts. Also DAC supports its CEVIS bicycle ergometer built for NASA and used extensively on ISS.

Currently the ISS is manned with six astronauts, and with the arrival of Andreas Mogensen and his crew, there will be nine astronauts on the space station for the 10 days. ISS is orbiting earth every 92 minutes in an altitude of approx. 410 kilometers and with a speed of almost 28,000 km/hour. As the ISS is a large scale international corporation with USA, Russia, Japan, Canada, Brazil and 10 European countries, including Denmark, a compromise was agreed with regard to the astronaut’s working time. Hence all ISS crew members, including Andreas Mogensen, are working according to GMT, which in the summer time is only 2 hours after DK time.